If you want to find a peaceful country to relieve the pressure of a busy life, the beautiful “million elephants” country of Laos will be your choice. In addition, Laotian culture is influenced by Theravada Buddhism, Laos is also an ideal pilgrimage destination for Buddhist followers. In this article, TADY TRAVEL introduces Top 9 amazing destinations in Laos visitors should come.

Vientiane Capital is a peaceful city. Vientiane attracts every visitor by the ancient architecture, bearing the historical imprint of the gentle and lovely Laos. As we all know, the Buddhist spiritual imprint has permeated the soul of every Laotian and blended into every scene here, Vientiane visitors can also admire the imprint of Buddhism anywhere in the capital Vientiane. From thousands of years ago, the reliefs and Buddha statues were sculpted with a sincere heart. 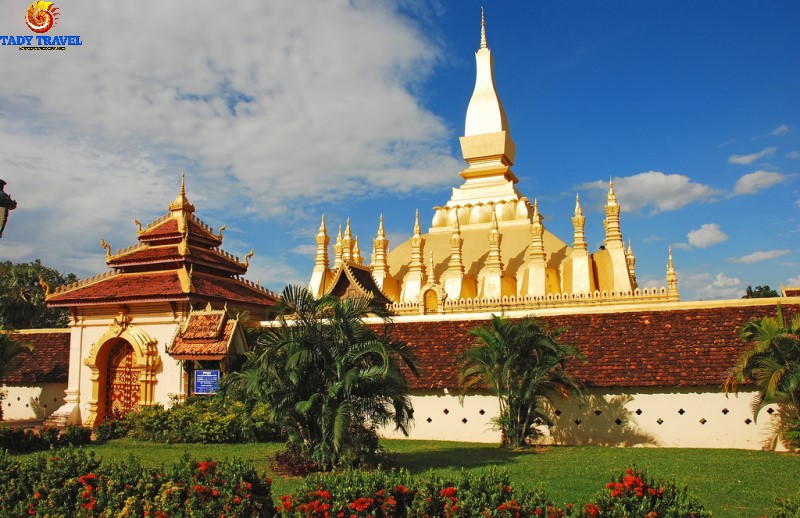 When coming to Vientiane, we cannot ignore the pride and symbol of Laos – the world heritage That Luang. When looking at this beautiful relic tower, visitors will have the opportunity to be satisfied with the luxury of a magnificent gold-plated masterpiece. This also shows the Lao people’s devotion to Buddhism from ancient history. The destinations not to be missed for a pilgrimage to Vientiane are the Buddha Statue Garden, Arc de Triomphe, Phra Keo Pagoda, Wat Ong Theu, Sisaket Pagoda… The temples represent a culture, which is the same. This is the place where the people here who put their faith in the divine will can touch all sentient beings, dispel all suffering in the tumultuous life.

Watch this video about AMAZING LAOS

Compared with Siem Reap of Cambodia and Hue of Vietnam, the ancient city of Luang Prabang is gradually renovating to deserve the name “tourist city” of Laos. Along the gentle Mekong River, Luang Prabang hides ancient architectural works, bearing the feats of the Lao people for a long time. It is said that when looking at the ancient capital of Luang Prabang, everyone can imagine and feel the life of ancient Laos. In the mysterious atmosphere and gentle beauty of natural landscapes, the palaces still stand tall and solemn in the capital city of Luang Prabang to tell each visitor about the ancient history of the beautiful country of Laos. The great sightseeing destinations in Luang Prabang are Pak Ou cave, Tad Sae waterfall, royal palace, Mount Phousi, Wat Xieng Thong. 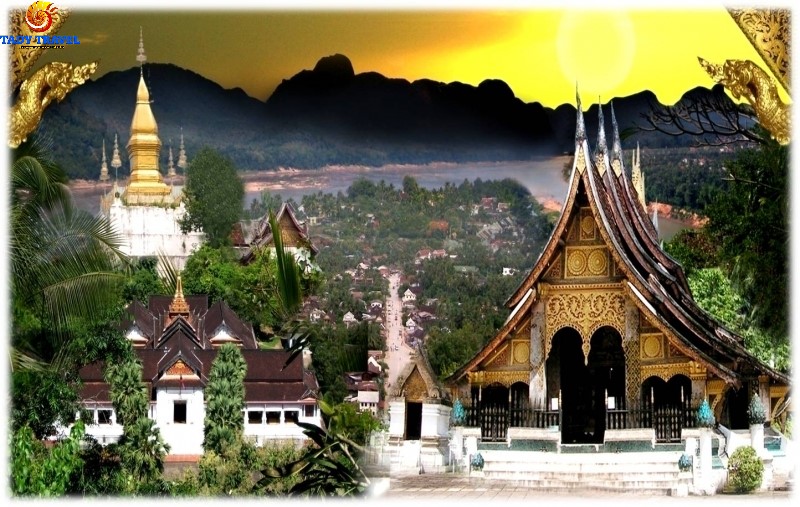 One of the most wonderful places in the million-elephant country, the Kuang Si waterfall complex promises to be a magical natural paradise for every visitor. You are like entering the hermitage of the fairy in the journey to explore the wild mountains and forests, and enjoy bathing in the cool lakes in the romantic Kuang Si area. Each visitor when visiting this place will enjoy the impressive natural beauty by the white foam created when the waterfall falls, blending into the harmony music from all kinds of birds chorus. Kuang Si Scenic Area is a magical place for each of us to immerse our souls in nature to relieve stress in the hustle and bustle of the world. 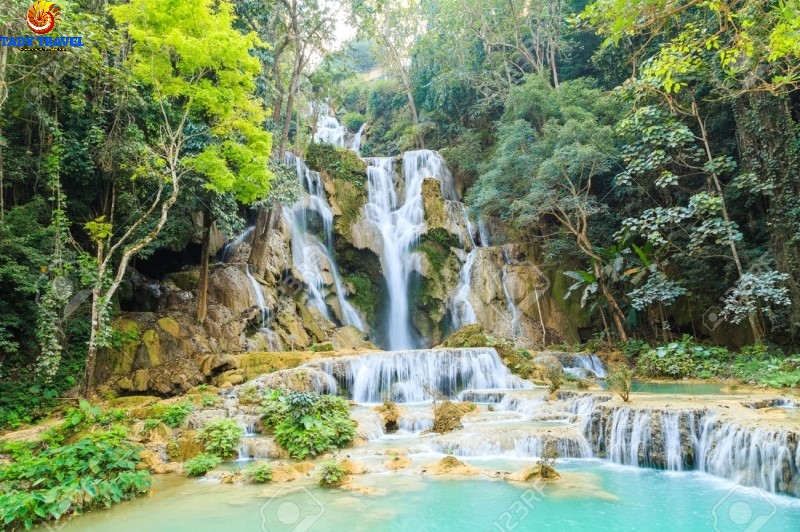 4. Field of Jars in Phonesavanh

If you love to explore mysteries and unsolved puzzles, the field of jars in Phonesavanh is an ideal place. The sandstone jars stand tall in the windy and pristine plains of northern Laos over 2500 years. There are many speculations about the existence of these mysterious stone jars: It is said that this is the burial place of the dead according to the popular custom of ancient Laos. As for the Lao, they say that it is made to store wine created by the giant tribe according to an ancient legend that has been handed down to this day. However, if you intend to discover the mystery of this field of jars, you can only visit the safe area for visitors. The reason is because this place used to be a war remnant from the US-Vietnam war and stored many undiscovered bombs and mines. Therefore, the journey to this mysterious field of jars requires visitors with a brave heart. 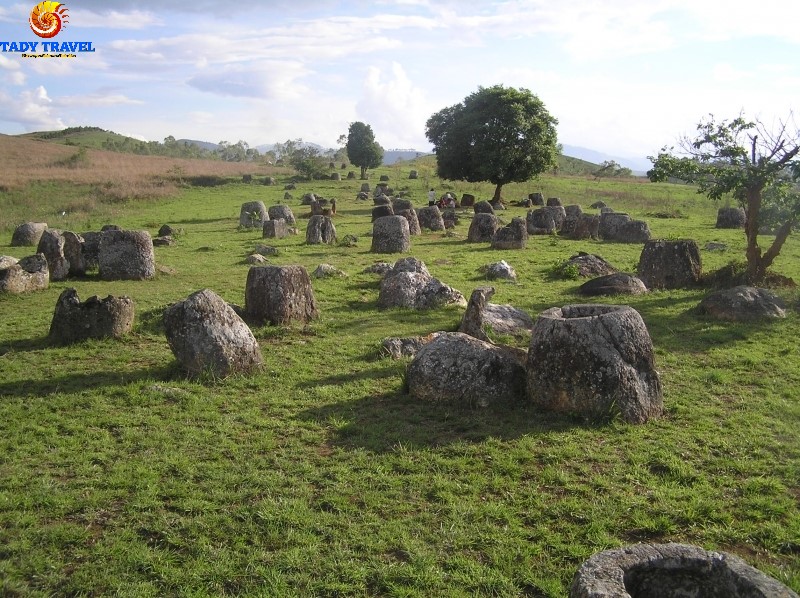 Bokeo Nature Reserve was established in 2004 with the mission of preserving 123,000 hectares of primeval rainforest. This forest is a place of rare biodiversity with animals such as tigers, bears, elephants, gibbons, buffaloes… and many species of birds and insects living. If you are passionate about eco-tours with a journey to discover nature and wildlife, then Bokeo Nature Reserve will be a destination you should not miss. With the beautiful name “hidden paradise”, Bokeo Nature Reserve deserve to be a must-visit destination in Laos . The most characteristic feature of the Bokeo area is the precarious houses built on the tops of tall trees. Visitors can experience the feeling of primitive life while staying at this delightful house. If you come to Laos, do not miss the Bokeo Nature Reserve! 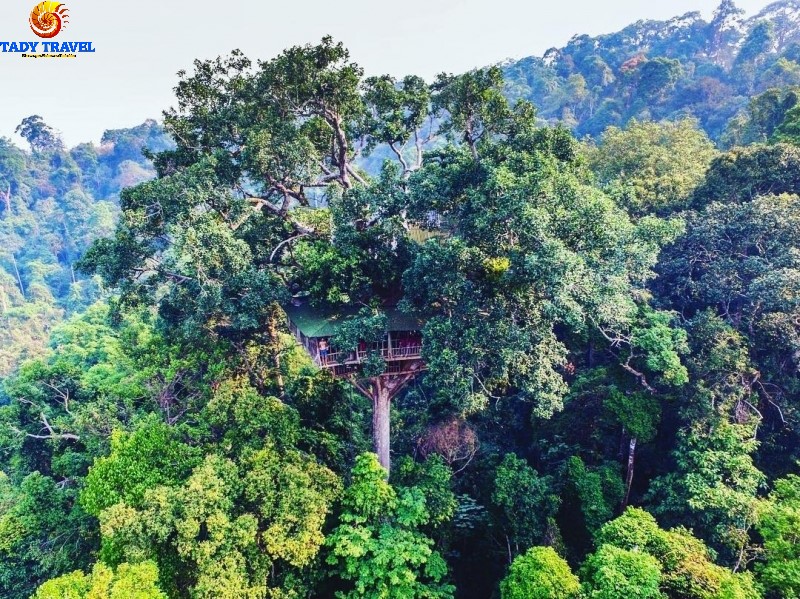 Located about 150km from the Vientiane capital, the small town of Vang Vieng is nestled in the vastness of green mountains. Known as a peaceful countryside with a fresh and cool climate, it is also a famous tourist destination of the beautiful country of Laos. There are no beautiful architectures, no modern resorts or wide stone-lined streets… yet every year, Vang Vieng attracts a huge number of tourists.Vang Vieng town is known as a peaceful countryside on the Nam Song river. This small town is both wild and peaceful. 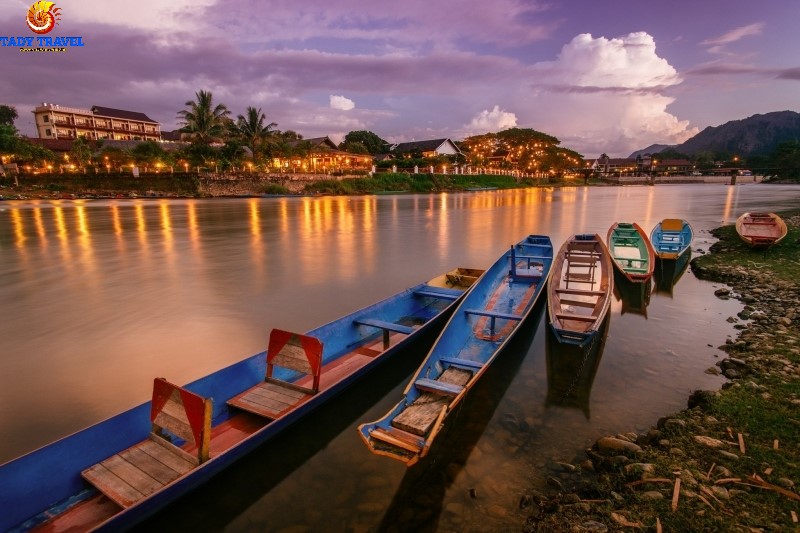 The wild character of Vang Vieng exudes from the green of the trees and the river flows smoothly all year round, winding around the limestone ranges. Many people are often surprised by the beauty that nature has bestowed on this small town.

Champasack has rich and diverse resources of forests, plains, and plateaus. The fertile land is favorable for agricultural development, this place is considered one of the largest granaries of Laos. Champasak is also an attractive tourist destination with many famous tourist sites such as Wat Phou Temple, Khone Phapheng waterfall, Phasom waterfall and the capital, Pakse. Pakse used to be the ancient capital of the ancient Kingdom of Champasack, today’s Pakse capital still preserves many ancient architectural works in a beautiful and gentle natural setting. Because it was influenced by the Cambodian Angkor culture for thousands of years ago, the architectural masterpieces in Pakse still retain the imprints of the powerful ancient Angkor empire. Thakhet is known by another name “Hue of Laos”. Traveling to Thakhet, visitors will be free to experience Thakhek night with many houses with romantic French architecture – located on the Mekong River, the other bank is the city of Nakhon Phanom Thailand. The town center has many French colonial architecture such as mansions, villas, houses with street shops. The Thai-Lao Friendship Bridge III is north of the town center, connecting Thakhek with the Thai province of Nakhon Phanom. As we all know, Laos was once a French colonial colony in the time of the three Indochina countries at the beginning of the 20th century. And one of the ancient cities still retains the historical imprints of France is city of Thakhet. There are not many temples like Vientiane, the typical feature of Thakhet city is the Western architectural works left by the French colonialists. 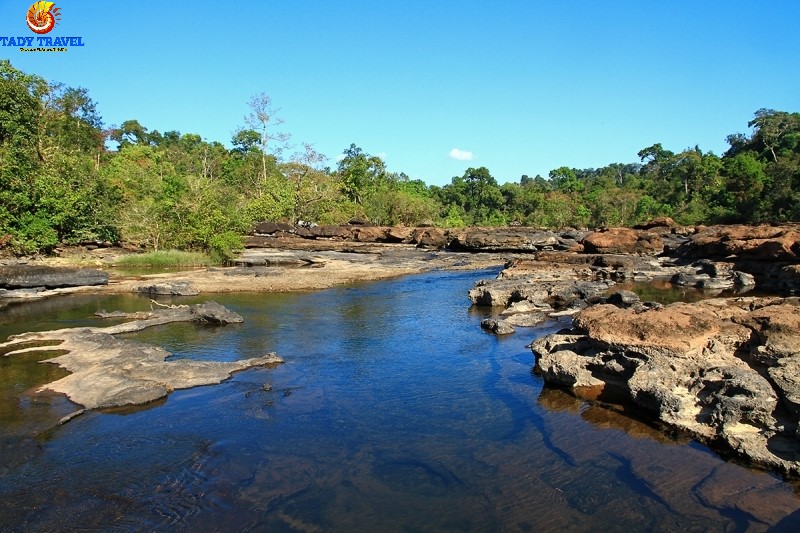 Tham Khoun Ex, also known as Ex Bang Fai, is a large river cave located far from Khammouane province in central Laos. Tham Khoun Ex Cave is an underground section of the Ex Bang Fai river – one of the largest river in the world with huge caves having many impressive geological formations. The cave originates from Annam Trung Sun mountain on the Vietnam-Laos border, crosses the Nakhai plateau and flows into the Mekong River. Nakhai Plateau was formed from large ranges of sand and carbon rock layers dissolved by the river to create Tham Khoun Xe cave as it is today, with a length of about 7 km underground canal.Before discovered by explorers, this cave was used by Lao locals for fishing on the lower reaches and mouth of the cave, while some small stone wall areas were great places for residents , raising and harvesting swiftlets. The entrance to the cave has a 60m high dome in a large area like a step-shaped arc of more than 150m high. The river sections in the cave are about 76m wide and 53m high, but in some areas the width exceeds 100m. The length of the largest river section discovered is 200m. The road through the cave is about 4-12m deep. In many places there are stalagmites and stalactites more than 20m high and there are a few pearls found in the cave with a diameter of 32cm. 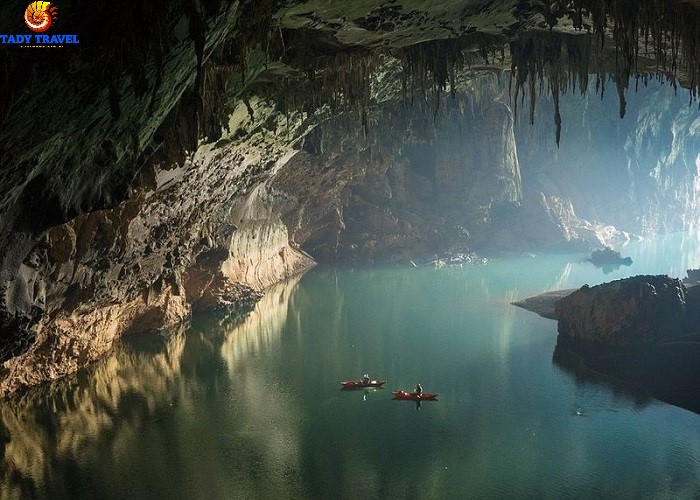